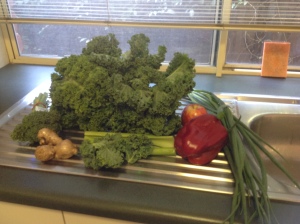 I can’t believe I’m actually saying this, but I succumbed to the whole ‘green smoothie’ fad, after a recent visit from my friend David. David is one of the wisest people I know when it comes to nutrition, herbs, and anything to do with health really. So, when he told me about how good the NutriBullet smoothies were, I was willing to be open minded.

Then the universe stepped in, and I won enough money on a random bet at the casino to buy one!! You can argue with that.

‘So Jane, have you become a kale drinking hipster?’, I hear you ask. Well, not exactly. But I have started putting more fruit and veggies in my diet via my Magic Bullet superfood nutrition extractor (yup, I’ve watched those infomercials), and I am feeling better. I’m not saying that adding a shot of vodka to the morning mix wouldn’t make it a even nicer, but, as this is my year of getting my act together on as many fronts as possible, this is a damn easy way to rev up your diet. 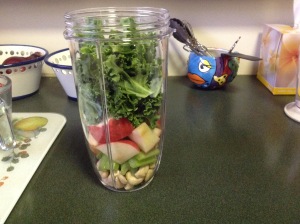 Mind you, you need a good recipe. The first one I made went down the drain. It was disgusting. So, here is my version of a green smoothie (thanks David!) I want to try drinking one a day for a month. And, if I don’t feel better at the end of the four weeks, then I’m heading straight to McDonalds for a burger and coke.

Slice of fresh ginger (to taste, it makes the smoothie very zingy)

1 cup of cold water, or coconut water if you want to be super trendy

Combine the lot in your Magic Bullet blender and blast it to kingdom come.