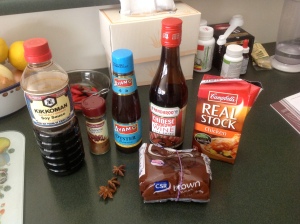 In honour of the Chinese New Year, I’m posting a recipe for a Chinese Chicken Hotpot. I make it in a slow cooker, but you could make it in a big pot on the stove, if you cooked it slowly. I’ve made the following recipe a few times and it was an instant favourite with my muse. It’s excellent to make in a heatwave, because when it feels like the gates of hell have opened above your city, then you don’t want to be cranking up the oven.

So here we go. The recipe is a big vague, because I have found that I like to adjust it to my taste. The ingredients are quite easy to find. I’ve pictured them above, so you know what you are looking for. Yummy!!

6cm piece of ginger, peeled and thinly sliced into matchsticks

2 long red chillies, cut into pieces (I use about ten because I love chillies, and I use the super hot small chillies)

Noodles (I use thin rice noodles) 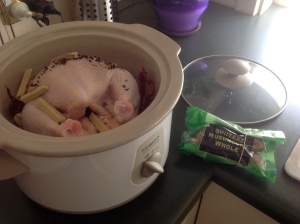 Method: Wash the chicken and place it in the slow cooker along with the star anise, ginger and garlic cloves and dried shitake mushrooms if you are using them. In a big jug, mix together the liquid ingredients and the sugar and Chinese five spice powder. Have a taste and see if you want to adjust anything. The cooking wine is strong in taste, and a bit unusual, but it is lovely when heated. Remember that the broth will be flavoured by the chicken bones in the chicken too. Pour the liquid over the chicken, and cook on low for eight hours. I turn the chicken half way through, and top up with water if needed. 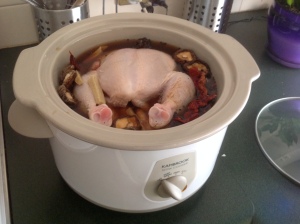 When the chicken is cooked, take it out of the broth and put to one side. When it has cooled enough, pull the meat from the bones and discard the carcass. Strain the broth into a big saucepan. I fish out the garlic cloves and shitake mushrooms from the seive, and put them back into the liquid. Cut up your vegies, and put them into the broth, letting them cook. Meanwhile, cook your noodles, and drain.

To assemble, put noodles in the bottom of a big soup bowl. Put the chicken in, then spoon over the vegies and broth, adding the chillies. I meant to take a photo of the finished dish, but forgot because I was so hungry. It was delicious!