Last post, I mentioned I was going to Perth to do a 2 day sewing workshop with sewing blogger and all round fabulous vintage starlet Gertie Hirsch. I purchased her book ‘Gertie’s Ultimate Dress Book’ about a year ago, and had been following her on Instagram ever since. When I heard she was coming to Australia to teach various dressmaking courses, I jumped at the chance before I could give myself time to think it through. My thoughts after I’d paid my deposit were along the lines of… ‘you can’t sew’, ‘who do you think you are?’, ‘you are too old to be doing this,’ blah, blah, blah. Plus, the only course which hadn’t sold out when I went to enrol, was in Western Australia, Perth. It’s bloody half a continent away from little old South Australia, and I don’t like flying!

God I get sick of that voice inside my head, that’s been there for EVER, telling me I’m not good enough, or can’t do stuff, or I’m going to be sitting next to someone on the plane who has the plague. When I got back from Perth, I realised what a fantastic experience I’d had, how well the dress I’d sewn on the course had turned out, and what a privilege it had been to sew with Gertie. Yet, the whole course had been tainted with the background voice in my head banging on and on about not being good enough.

Each year, for the last few years, I’ve set myself a theme for the year. I had The Year of Reading Instructions, The Year of Saying It’s All In The Timing, but next year is going to be The Year of Speaking Well About Myself. That means inside and outside. It’s going to be a challenge, but I’ve often wondered what would happen if you lost your memory, woke up, and decided your life was amazing, and then just got on with it!

In the meantime, I’m going to put my new dress on, get out there into the world and start telling myself that I’m okay. Let’s see what happens! 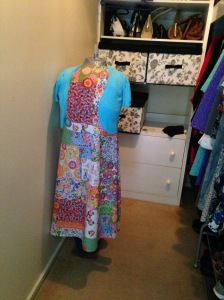